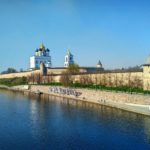 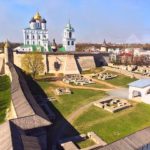 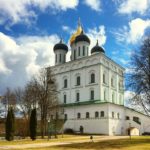 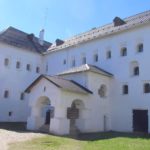 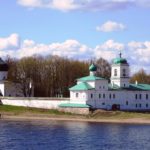 Pskov is one of the oldest Russian cities. The first mention in the annals dates back to 903. The main attraction of Pskov is the Kremlin (Krom), located on a high promontory at the confluence of two rivers – Velikaya and Pskov. On the territory of the Pskov Kremlin you can see a large number of ancient monuments and structures: Dovmont town, Naugolnaya, Vlasyevskaya, Pokrovskaya, Mikhailovskaya and Gremyachaya towers, the Prikaz chambers (XVII century) and the pearl of the architectural complex – Trinity cathedral with bell tower. The Trinity Cathedral is the main temple of Pskov and the Pskov land.

Pogankin’s Chambers – a monument of the medieval Russian architecture of the late XVII century. They are built in the classical Russian style, with massive walls and narrow window-loopholes, towers and fortress wall. Pogankin’s Chambers are interesting for their museum collections. It exhibits a rich collection of unique Pskov icon painting of the 14th-17th centuries, a collection of Russian artistic silver, as well as items from Pskov treasures found in the foundations of medieval houses.

Mirozhsky Monastery is located in the mouth of the small river Mirozhi. The Transfiguration Cathedral of Mirozhsky Monastery (1156) is the oldest surviving church in Pskov. The walls of the cathedral are fully painted with unique frescoes of the XII century, which are listed as a UNESCO World Heritage Site. In addition to the Transfiguration Cathedral, the ensemble of the Mirozhsky Monastery includes the house of the rector, the Church of St. Stephen the Archdeacon (18th century), the fraternal building, the bell tower, and the monastery’s stone fence (1799-1805).